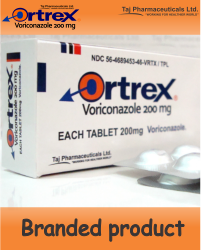 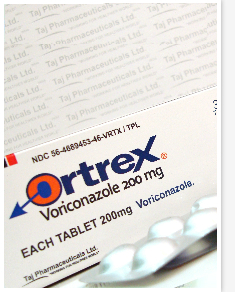 Voriconazole, administered orally or parenterally, has been evaluated as primary or salvage therapy in 520 patients aged 12 years and older with infections caused by Aspergillus spp., Fusarium spp., and Scedosporium spp.

Candidemia in Non-neutropenic Patients and Other Deep Tissue Candida Infections

Voriconazole was compared to the regimen of amphotericin B followed by fluconazole in Study 608, an open label, comparative study in nonneutropenic patients with candidemia associated with clinical signs of infection. Patients were randomized in 2:1 ratio to receive either voriconazole (n=283) or the regimen of amphotericin B followed by fluconazole (n=139). Patients were treated with randomized study drug for a median of 15 days. Most of the candidemia in patients evaluated for efficacy was caused by C. albicans (46%), followed by C. tropicalis (19%), C. parapsilosis (17%), C. glabrata (15%), and C. krusei (1%).

An independent Data Review Committee (DRC), blinded to study treatment, reviewed the clinical and mycological data from this study, and generated one assessment of response for each patient. A successful response required all of the following: resolution or improvement in all clinical signs and symptoms of infection, blood cultures negative for Candida, infected deep tissue sites negative for Candida or resolution of all local signs of infection, and no systemic antifungal therapy other than study drug. The primary analysis, which counted DRC-assessed successes at the fixed time point (12 weeks after End of Therapy [EOT]), demonstrated that voriconazole was comparable to the regimen of amphotericin B followed by fluconazole (response rates of 41% and 41%, respectively) in the treatment of candidemia. Patients who did not have a 12-week assessment for any reason were considered a treatment failure.

The efficacy of oral voriconazole 200 mg twice daily compared to oral fluconazole 200 mg once daily in the primary treatment of esophageal candidiasis was demonstrated in Study 150–305, a double-blind, double-dummy study in immunocompromised patients with endoscopically-proven esophageal candidiasis. Patients were treated for a median of 15 days (range 1 to 49 days). Outcome was assessed by repeat endoscopy at end of treatment (EOT). A successful response was defined as a normal endoscopy at EOT or at least a 1 grade improvement over baseline endoscopic score. For patients in the Intent to Treat (ITT) population with only a baseline endoscopy, a successful response was defined as symptomatic cure or improvement at EOT compared to baseline. Voriconazole and fluconazole (200 mg once daily) showed comparable efficacy rates against esophageal candidiasis.

In pooled analyses of patients, voriconazole was shown to be effective against the following additional fungal pathogens:

IMPORTANT NOTE
This product information is intended only for residents of the India. Taj Pharmaceuticals Limited, medicines help to treat and prevent a range of conditions from the most common to the most challenging for people around the world. The Price of the drugs indicated above may not match the actual price at which they are sold. Prices can change depending on many factors, including local taxes. These are only approximate indicative prices of the drug. The products discussed herein may have different product labelling in different countries. The product information provided in this site is intended only for the residents of India.

Hospitals in India Taj For Doctors

Information to Patients and Doctors